This blog series was published first on the Stage Managers’ Association website. At the time of writing, I am a Director-at-Large on the SMA Board, and have also been a past Secretary, Vice Chair, and frequent host of social gatherings for the organization.

If this is the first blog you’re reading of this series, I recommend you go back and read parts one and two, as the vocabulary builds off the words explained there. As I like to point out, there is no one way to stage manage, and what you will encounter will vary with every production. Here are some samples of how *I* have organized my score, which you may find helpful.

I like to set myself up to follow along with the music as easily as possible. If I’m distracted by someone asking me a question, then look back at the score, I want the quickest guidelines to help me find my place again. I was taught to use highlighters, and I’ve taken that concept and run with it. Now that Pilot/Frixion makes erasable highlighters, my world is even better. (I order them online to get the Japanese pack with even more colors.)

After making sure I have the same score that the rest of the production staff will be using (see previous blog), I next take a look at the character list and assign a color to each one. I go for stereotypical colors – the lead female is pink, the lead male as her romantic interest is blue – and move on from there. If there’s a featured third character onstage a lot with them, like the title character in Don Pasquale, I’ll assign that person yellow to round out the near-primary-color layout. From there, I’ll try to assign rainbow colors in order for voice types. Often, the mezzo-soprano is orange and the bass purple. You may, of course, run out of colors, so look for those who are never onstage together to double up. Alternately, you can use colored pencils for more variations in color. Make yourself a cheat sheet with these colors; I’ve even started making that list part of my back page when calling an opera.

Some opera stage managers use doublesided scores, some use single sided. It depends how much blocking you want to record, really, as well as how many pieces of paper you want to carry around. I come from a musical theatre background, and am usually a one-script caller (same script for both blocking and show cues). If I am the calling stage manager, I’ll usually use a single-sided score. However, if I’m the ASM backstage, calling entrance cues, I don’t want to carry around all that weight. I’ll use a double-sided score for that. If you have the advantage of Adobe Acrobat (paid, not free), adjusting the margins before printing is helpful as well. (Tip: adjust your margins via Tools > Edit PDF > Header & Footer, then under Appearance Options select “Shrink document to avoid overwriting the document’s text and graphic.”) It’s not as easy to do this with a reduction feature on a copier, but can be done.

In opera scores, how quickly you need to turn the page depends on both the speed of the music and the number of people singing at once. Principals will usually get their own staff (plural: staves) to follow, represented by 5 lines with pitches. Chorus members may be doubled up like a hymnal, with women’s voices together in one (treble clef), men in another (bass clef). Additionally, the pianist will have treble and bass clef staves. To indicate everything is sung at once, there will be a vertical line drawn to the left of multiple staves, signifying a single system. I like to break these up visually. One version is to use a big orange bracket.

If I combine Don Pasquale’s yellow highlighting with an orange bracket for the piano, I can see the entire system that is sung at once: 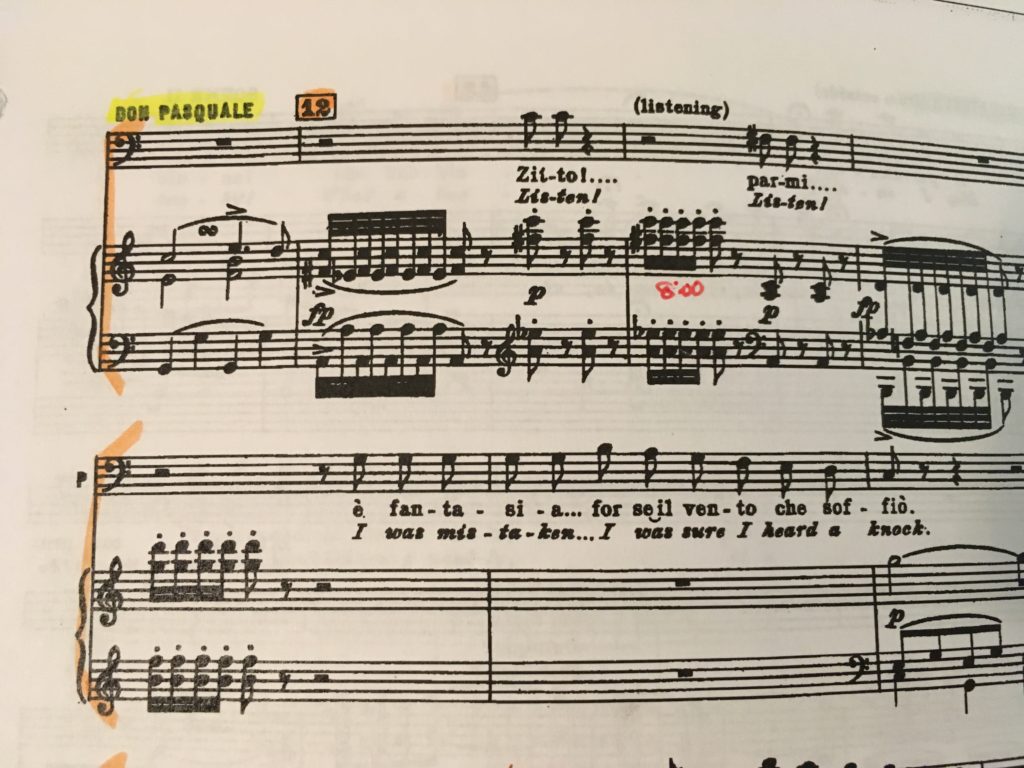 You’ll also notice that I’ve highlighted the number 12 in a big box. This is a rehearsal number, providing a great guidepost in the middle of a piece. In this case, during rehearsal we could say, “We’re starting at one before Rehearsal 12,” and everyone following along knows exactly where we’ll begin. If the singer is off book, the Maestro will inform them it’s one measure before “Zitto!...parmi…”

Don Pasquale is the only one singing on this page, so I only highlighted the yellow one time. I could also choose to do every “P” in the margin as well, and perhaps forego the orange brackets on this page. It’s all whatever helps your brain best follow along. You’ll also notice the “8:00” marking in red. That’s a timing I took. More on that later.

Here’s an example where Dr. Malatesta now joins in on the singing (when Don Pasquale has been singing for a while). Malatesta is in green. 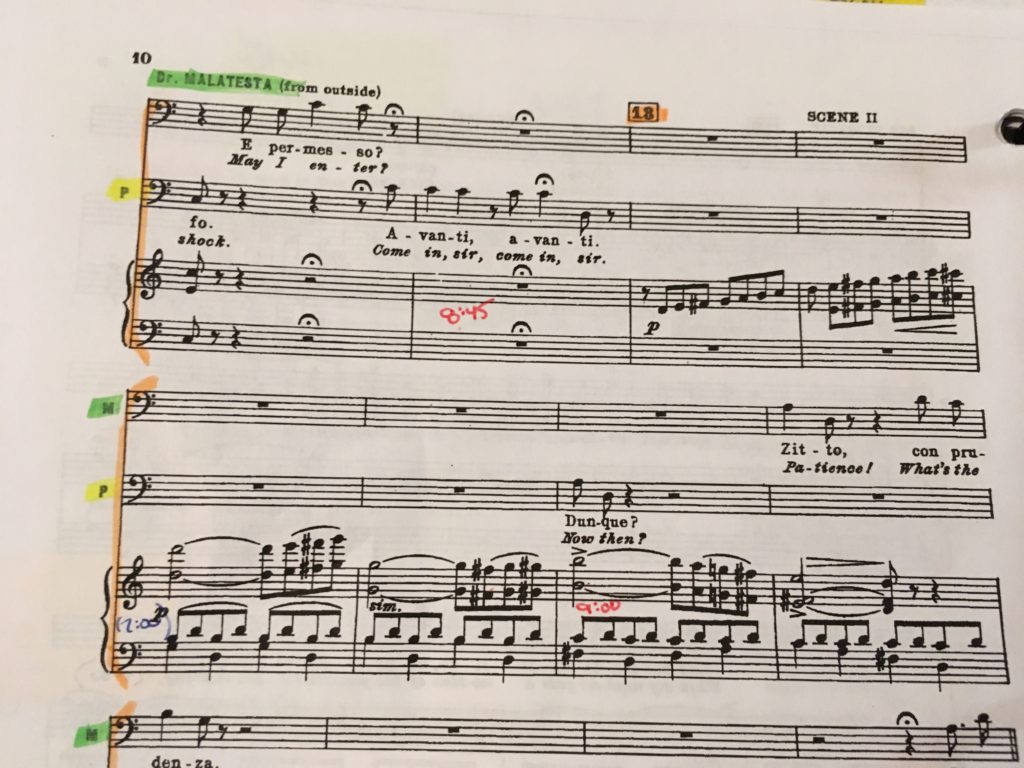 In the next sample, Malatesta is now singing by himself. The green was bright enough for me, so I decided that was enough to separate the systems for my eyes. Also, if I’ve looked away and he’s now singing by himself, I can quickly scan to where there’s no yellow (for Pasquale) on the page. Starting to see the benefit? 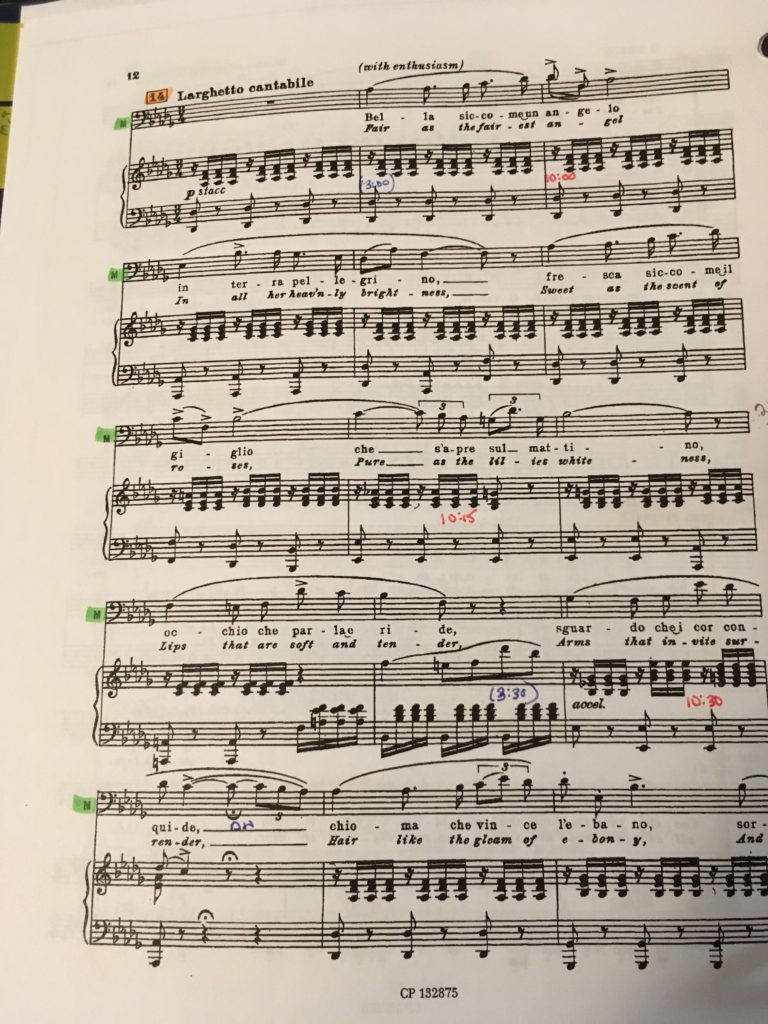 Next are two different examples of when three are singing. The lead female Norina has now joined. I played around with this script/score whether I liked the orange brackets or not. 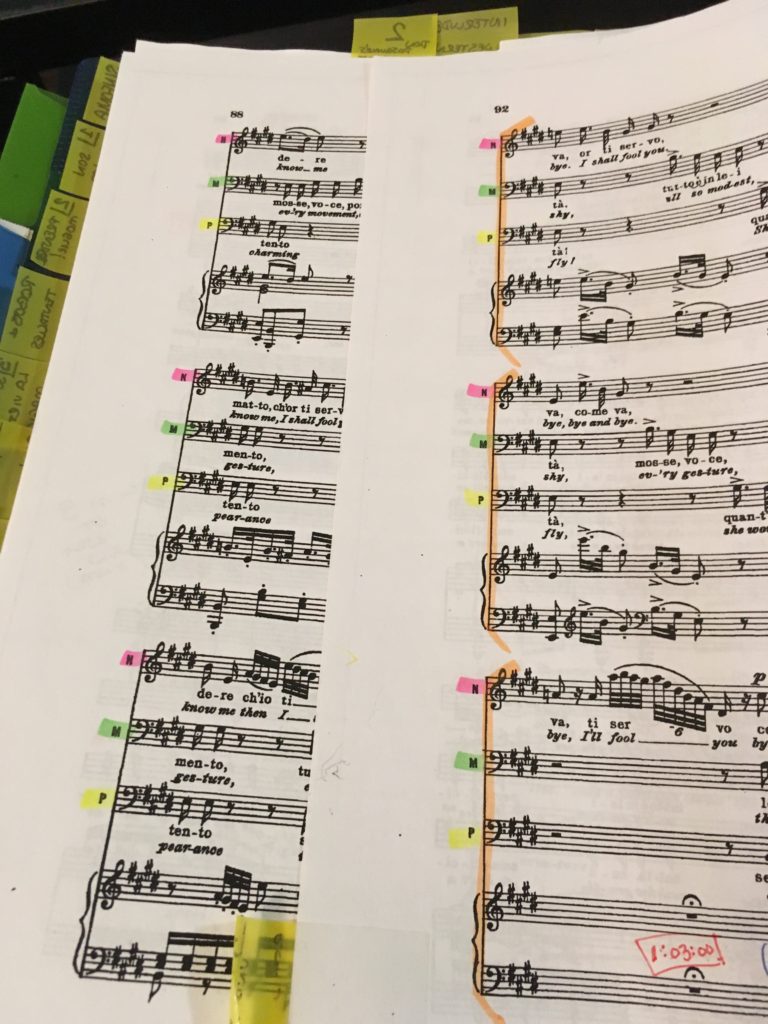 By 100 pages into the script, I’d come up with a newer system that is currently my favorite: using an erasable pen and a straight edge to mark the separation. This actually seems cleanest to me and will likely be how I next mark times there are three or more singing. When two are singing, sometimes just character highlight is enough for me. It’s your score, see what works for you! 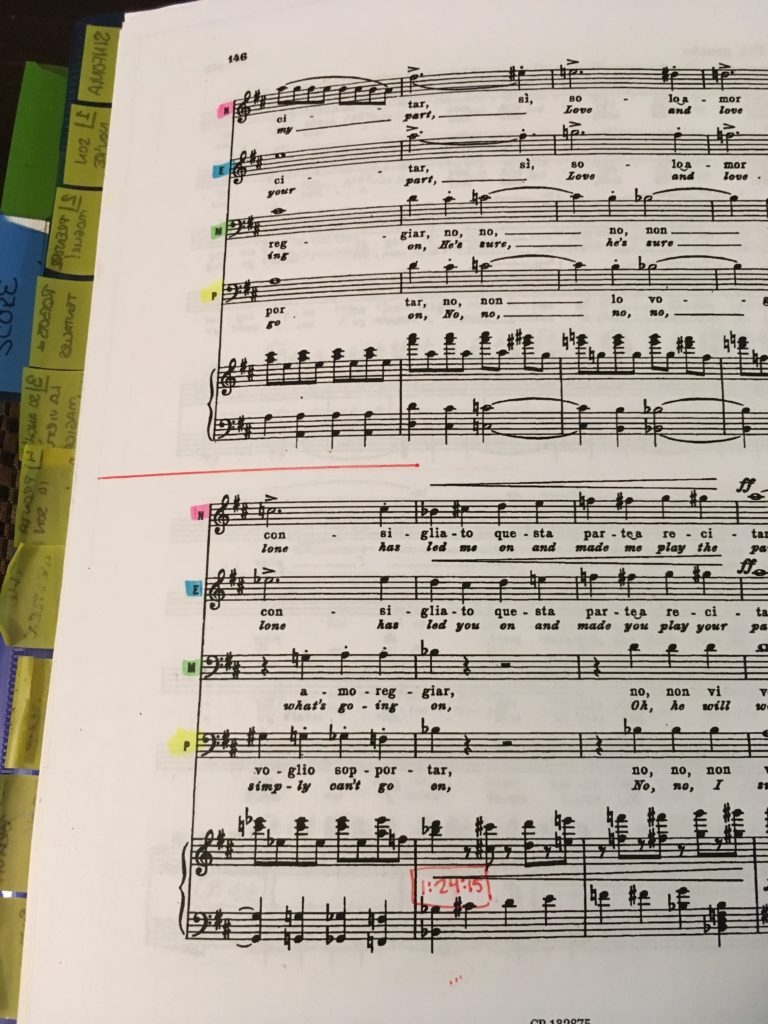 At the end of the scene, after the singers cut off, you may have a musical playout that suddenly takes much less space per system. 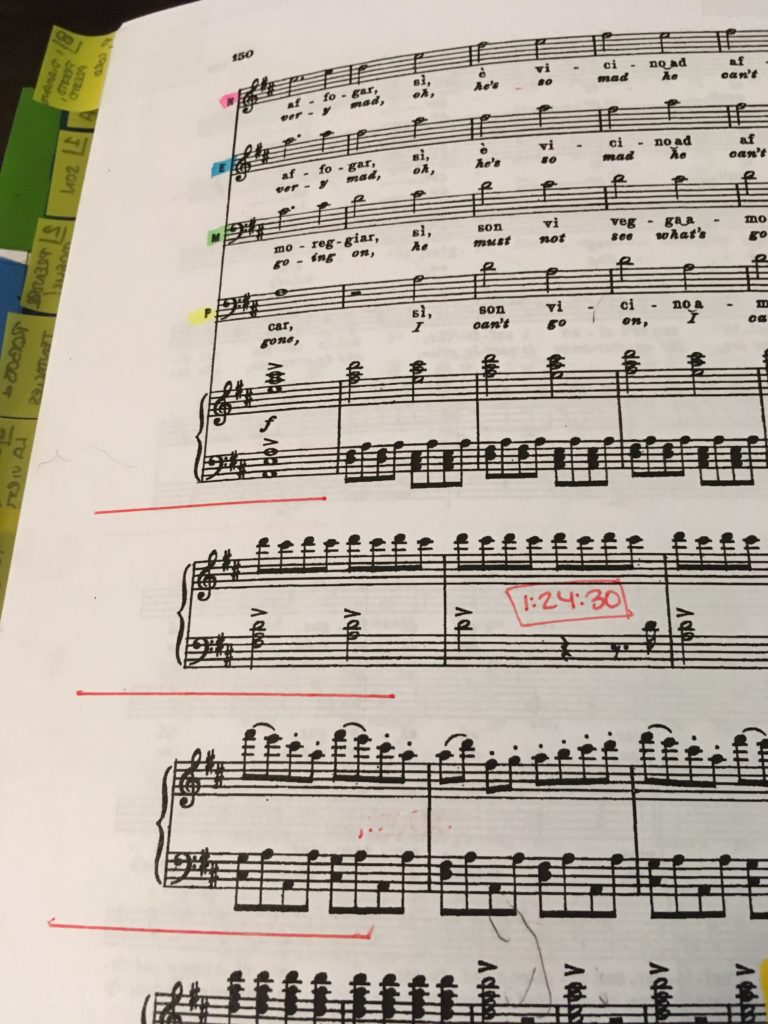 Be sure to clearly mark the musical cuts you’ve been given, too.

If it’s a common/standard optional cut, your score may be marked with “vi” to indicate the starting location.

Similarly, this may be notated by “de” if standard.

If your music has any repeats or codas, I highly recommend printing yourself extras of these pages and crossing out (or cropping) any extraneous measures.

Although all this highlighting and marking up the score takes time, the sooner you can do it, the easier it will make some of your other jobs. It also gives you a visual sense of the progression of the show. If instead of the title of the piece, you’re told “we’re going to skip to Norina’s aria,” you can now page forward to a bunch of pink marks as an option. You won’t be nearly as daunted following along either. I recently coached fellow stage manager Peggy Samuels on the phone and online (many states apart physically) for her first opera. At the end, I received the following message from her, used with her permission:

“First opera done.  The biggest help was highlighting the bars.  Having to follow Italian music for 3 hours is exhausting.”