[This blog series was started for the Stage Managers' Association.]

The previous blog posts (start here if this is your first time viewing the series) dealt with some generalities and then about prepping for a production. While there are many more details that I could go into, I’m jumping ahead to some of the differences in the rehearsal hall for an opera. The primary reason for this is that I’m just finishing up the first week of rehearsals for an opera, and it’s presently on my mind! Again, there is no one way to stage manage, and this blog is only to give you an idea of some of the ways that I personally do things.

Both musicals and operas tend to* start with working through the music first. This can sometimes take several days in a musical, depending on how prepared the actors are, including how well they sightread. In an opera setting, singers are expected to come fully prepared on the music, often having had private coachings on their own (or if local and comprimario/smaller roles, perhaps coachings from someone within the same opera company). The first singthrough then is more about setting tempi and assuring everyone agrees on the same cuts in the music, though a preliminary list of changes was already sent to all involved. Depending on the opera company, there may be an entire music department who deals with those changes, especially to transfer the information to the orchestra, but I dutifully note any changes in the daily report. As mentioned previously, placement in the music is notated with slashes in between, so the pictures below represent the following note, ‘CUT: 68/3/3/2 (after “Io stesso? E come?”) to 69/2/4 “In una canzonetta”.’ 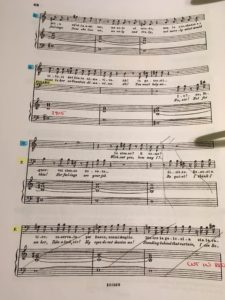 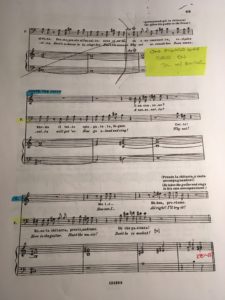 There will likely be just one day of music rehearsal before you start staging.

Tracking the Parts Not Sung

As you’re following along for the first time and they discuss cuts, you might hear the phrase, “Are we going to take the standard cut?” Opera can be repetitive, or have sections that aren’t as crucial to the story, so some cuts are done on a fairly regular basis, and are often marked by a “vi” and “de” as mentioned in Part Three. Another common thing singers do is to not sing one set of repetitive words towards the end of an aria (solo). I like to mark these for myself, and tend to do it with a big parantheses, as often it’s leading up to a cue for myself at the end of the piece. 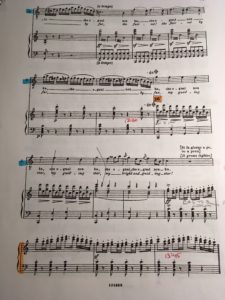 Tracking Where We Are

In addition to all the things I mentioned in Part Three: Setting Up Your Score, I also will help myself out by marking crucial musical moments. I’m working on Rossini right now, which can go by VERY fast at times, and can also have a whole bunch of people singing at once. I’ve started using my erasable blue Frixion pen to mark crucial landmarks. The picture below shows a big rest/breath everyone takes, a line only Figaro has, and then a line only the Count has. 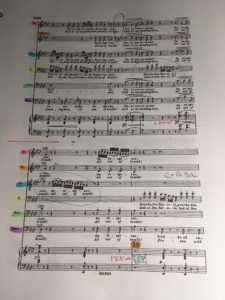 You’ll also notice a fairly recent development to my stage managing style, the “GSP” handwritten in green with a rectangle, in the last measure. It’s my own acronym: “Good Starting Place!” I’ve started using these in musicals too, for times that seem to work for everyone to pick back up again. In this case, I’d ask Maestro to start at Rehearsal Number 90, and they would inform the cast what that meant for their lyrics.

You may also notice that my score is double-sided. This is the first time I’ve not done a single sided script with blocking pages on the back. I have an assistant director whose job it is to record the exact blocking, and will run our cover (understudy) rehearsals, along with four (!) other people on our stage management team. I primarily need to get big picture things, so I’m opting to do half-sheet blocking pages when needed. I did a similar half-sheet when I was assistant stage manager on the last opera. I’m still tweaking things, but here are snapshots of the latest layouts.

As an ASM, I most cared about entrances, exits, and props, along with a general picture of who was positioned where:

As Stage Manager, I’ll be with the Assistant Director, Director, and Lighting Designer while we set light cues, and can help with the general layout of positions (but will default to the AD’s final notes), so I gave myself the groundplan and a place to take limited blocking. I also have a cheat sheet of the highlighter colors I used, along with Character and Singer’s Names, and a place to write a given prop or costume note for each. I also wanted a place to record tech elements. On this particular show, we have two Revolves (SR/SL – in this case at the 180 position), a Tracking Barber Unit (US) and three moving Staircases. I pre-printed the blocking/slip sheets per each look (this is #1.5), so was able to type those out at the bottom. I also have space to write in any other tech needs, like descriptions of light cues. 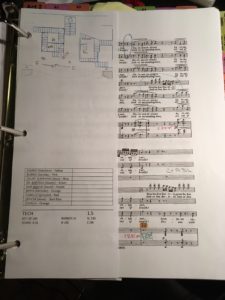 This first time I tried making these half sheets, I inadvertently had a “bad” hole punch, so my score ended up not in alignment with regular punched paper. It actually worked for me as an ASM, as my half sheets stuck up a quarter of an inch or so above the score. As I only had them in at big moments, I added some orange highlighter to the top (my go-to marking for “Chorus”), along with a note of which scene it was. This was actually a great “tab” for me as we jumped from Chorus entrance to entrance for their rehearsals.

* I say “tend to” because this time we actually had a venue conflict and started with staging on the first day, then concentrated on music the day we couldn’t be with all of our props, etc. It took a lot for our brains to adjust!