[This blog series was started for the Stage Managers' Association. Part Four has been a bit delayed due to my working summer stock! I just finished week 6 of a 10-week contract, and am in tech for Show #2 with Show #3 starting rehearsals tomorrow as well. Whee!]

One advantage of stage managing an opera is that the timing of a show doesn’t tend to vary much once it’s set. When a show has dialogue, that’s where you’ll find more wildly varying runtimes for a scene or production. Spoken text could come out faster one day than another, and audience reaction time certainly can change a performance from afternoon to evening, whether it’s filled with laughter or a quiet audience. However, even in a musical, the songs rarely change their timing. Think about a tap number in 42nd Street. If the music was faster or slower on a given night (which does happen), either the dance steps couldn’t fit in and the dancers would be worn out if too fast, or the opposite, the longer notes would be even longer, and singers could run out of breath, and the dance would seem “sloggish.” Dialogue is not common in opera (though certainly present for some), so once the tempo of a given piece is set, it really won’t change too much from day to day. Also, there are some pretty standard tempi for some of the more-produced operas. Stage managers can use this to our advantage.

During prep, see if you can find out which recording your maestro/conductor prefers of your opera, assuming there is one. You’ll either get a definitive answer or “oh, I haven’t even listed to a recording for a long time” if it’s a standard opera. Also, if it’s a remount by a given director, you may have a chance to simply watch a past recording. If no one can lead you to a specific recording, see if anything is available on YouTube or CD. (If you’re less familiar with opera, see if you can phone-a-friend for recommendations.) I like YouTube, because I can also get a sense of the scale of a production at the same time, or which characters are singing what – of course knowing that my production may be vastly different.

For stage management, it’s standard to then taking timings into your score. (If you haven’t read my blog post on preparing your score, do that first!) Thirty seconds apart is very common, though I prefer to start with fifteen seconds. The primary advantage to this is that if I miss one, it’s a lot easier to go back and catch what I missed! I will also record where I am in the given recording I am using, listing perhaps a track number from a CD, or a timing from a video – especially if they let the recording run during the orchestra tune or similar, prior to the actual start, or kept the same video going after intermission. You really want to record the timing from the top of each Act, rather than starting over for each song, but both are helpful. When we get to the first singthrough, I will make an attempt to re-time the songs, though this can be trickier if they stop and start. I am now a huge fan of colored erasable pens (as mentioned in a previous blog), and this is one more use for them. 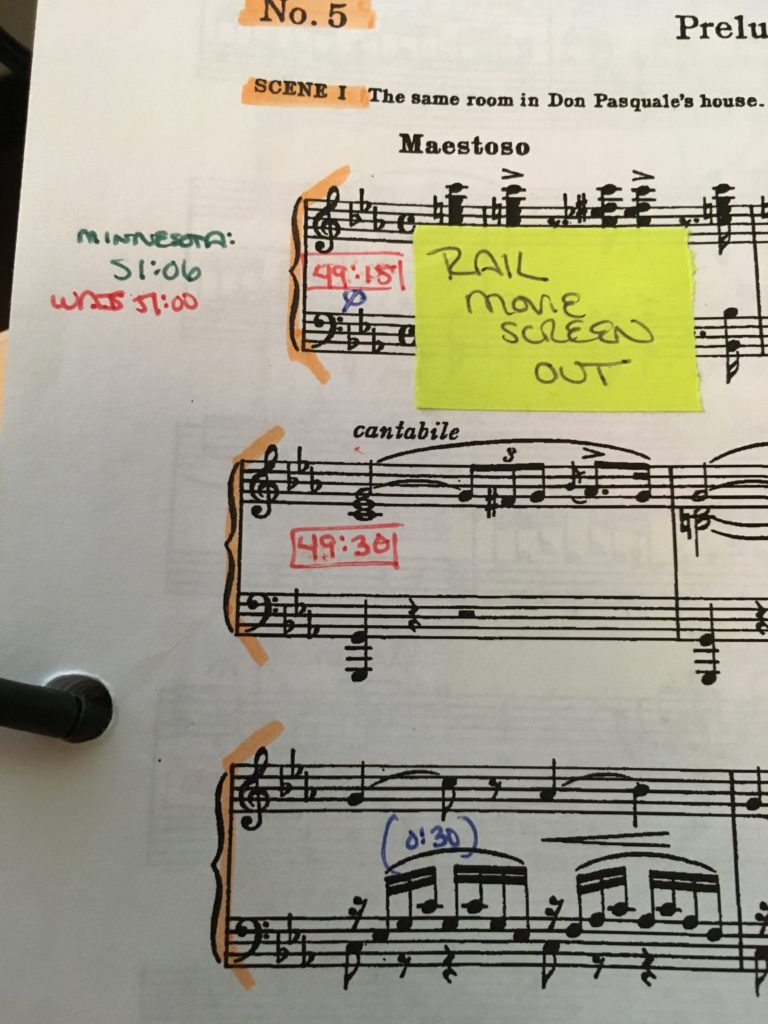 This image attached shows several colors. I started with red for the timings, based off a recording of a previous mounting of the same production. Green shows the start timing of a recording from Minnesota of the same production, which we also referred to quite a bit. We then decided to add some cuts that weren’t present in the original, so the first timing has “WAS” written with it (to find on the recording). [True confession: It used to say AT for Atlanta, which is why the S looks funny. It's an erasable pen and I still hadn't erased!] The new timings have rectangles drawn around for “finality” for the rest of my team to copy; I kept red because the first part of the act could remain with the same timings until we got to the cut. Blue was from when I timed a singthrough – a zero at the top of the song, and blue with parantheses to show where we hit 30 seconds during the singthrough.

Though not used a lot, sometimes I will take time during prep and make myself a document of how long each section of the opera takes. This can be used to know if you have time to run the number again before a break, for example, or even begin to have a rough idea of quickchange needs. Eventually, the timings will be very important for the backstage running paperwork, especially the Who/What/Where and First Entrance Timings documents that are rather standard for opera. It will also be used for all those Places calls you’ll need to start planning. Taking the timings also gives you one more chance to familiarize yourself with reading the opera score before rehearsals. You may not have another real chance to time the show in one go other than the last night in the rehearsal room; as discussed previously, opera is often rehearsed very piecemeal with a single room run prior to tech.