If you’re stage managing a piece with dance, dancers (and their directors and choreographers) will likely want some marks on the stage to help them hit the same marks every time. A mark is placed at downstage center for just about every show I’ve ever done. Beyond that, there are some differences between what kind of dance you’re doing. 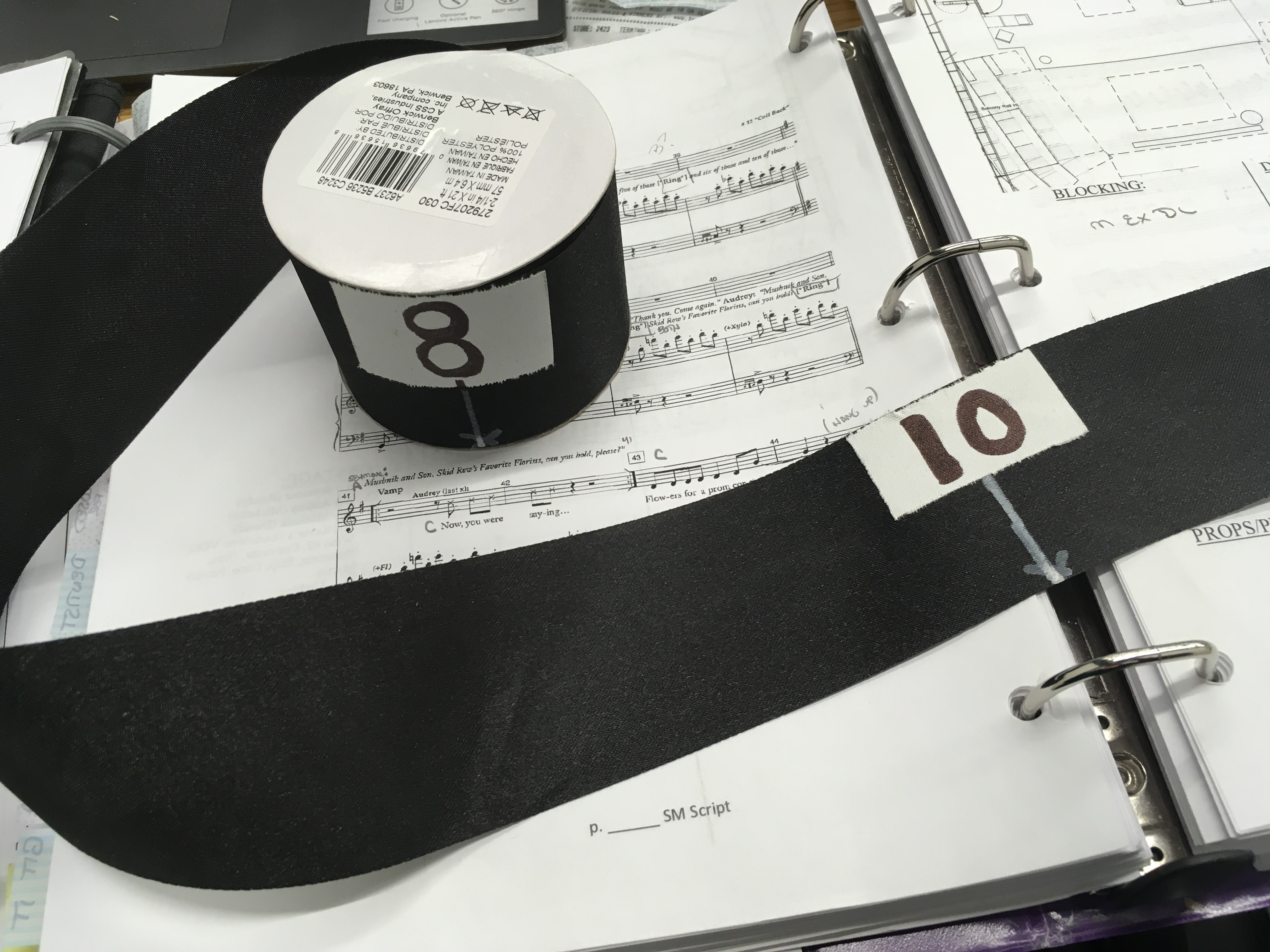 For ballet, there are usually quarter marks and eighth marks. These can vary in distance depending on the width of your proscenium. You still may not want to go all the way to the edge, so, if your proscenium is 50’ wide, all marks may be based on 48’ feet (especially if you only have 48 in your rehearsal room). The choreographer and ballet mistress will be the ones to decide this – just make sure you are all on the same page. For a recent show I did, we had the big downstage center mark as a large “T” (with the top of the T towards the audience). We based our markings on 48’, or 24’ each side of center. At 12’ each side we put two more Ts for quarter marks. We also put single US/DS marks of tape for eighth marks at 6’ and 18’, and then an L-shaped corner mark at 48’, as our proscenium was a bit wider. 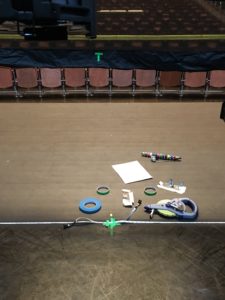 When making your measurements, you may want to “burn a foot” off the tape measure each direction; exact ends/zeroes of tape measures aren’t necessarily intuitive.

If you use a show scrim, consider putting the same markings on the bottom edge/pipe of the drop, so that dancers can line up behind it properly. Also, if you reuse the same set from show to show, make sure the marks still line up, should the piece be not quite hung the same location year to year….I say this from experience! 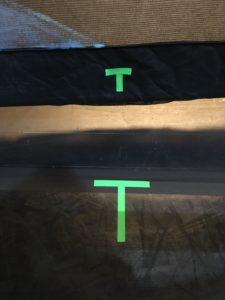 Marks for center on both the flooring and the show scrim

We also put similar marks upstage for our production, but had to do more than one set, as an extra row of marley* dance floor was put down for the second act. Our seventh panel of marley had a full set of spikes, placed DS of the edge with enough room that they wouldn’t be covered when an eighth panel of marley was gaff taped to it each night. The eighth panel of marley then had a reverse set of spikes on it, so that we could line up center properly each night. This also ensured that any other spikes on that marley piece (for the scenery) were also in the same place each show.

Finally, it can also be really helpful to have LED stage markers at the downstage edge at specific locations. I first learned about these when we had people in character costumes who could barely see out the face mask. They’re also helpful if you have fog or clear plastic snow (yay, Nutcracker) fall on top of the spike marks. A couple good options can be found at Tools for Stagecraft. You can choose a single color, or some that can switch between colors depending on your need. For instance, I’ve used a green one at center, and red a little further each side (on the quarter marks for ballet).

One option of battery powered LED stage markers, found at Tools for Stagecraft; there is also a 9-Volt version.

[Edit: I now own a set of these. Take a look at how cute they are! I'm thinking of more uses for them, like backstage where glow tape won't get charged.]

Finally, you'll likely want a big center-center mark for them to know what your production is considering the center both upstage/downstage and left/right (whether it REALLY is the center or not). I'm planning another blog post about my two-tape method for measuring, but in the meantime, here's an example of our center-center, measured equally off the quarter marks for a double check. 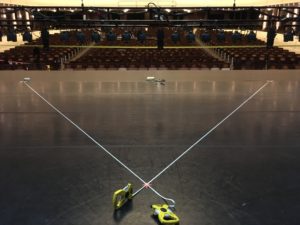 For musical theatre and when I worked with the Rockettes, I’ve used a number line many times. These are certainly great for rehearsal, and depending on the complexity of the show, may also be desired for the stage. Typically, a Zero is placed at center, and then number markings in two feet increments out both sides. When you get to the stage, you may be able to get by with markings only 4’ or so, depending on the staging, though most of the time, it stays at 2’. There is always a question of exactly how it may get incorporated into the set design, particularly if most of the audience has a full view of the downstage edge. Sometimes number lines can be concealed with specifically placed “paint splotches” and similar. 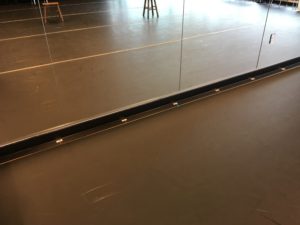 A temporary number line placed by the mirrors

You can be as low-tech or high tech as you want for the number line in rehearsal. When I toured with the Rockettes we had to get exactly the right kind of numbered mailbox stickers – and the “1” had to be the same width as a “0” or finding the center of 10 was awkward. I also needed to place them exactly perpendicular to the stage or the dancers could start drifting one way or the other…we used lasers, string, lining up behind each other…everything we could to make sure they were exact. And then we placed another line number further upstage. Anyone who has taped out a set with me knows I still have a bit of PTSD from needing all my spikes (including the length of the spikes themselves for various set pieces) to be accurate to a quarter of an inch.

Meanwhile, most of the time, you don’t have to be that excruciatingly exact. You can slap out a number line very quickly by running tape measures across the front and putting a piece of spike at 2’, 4’, 8’, etc. Or, you can travel with a portable number line. These can be made from various materials, and I’m still trying to decide my favorite. I’d advise that you don’t get anything that could stretch easily; we had one set out of jute that very quickly became unusable. For my latest musical, I did a very quick and dirty version for about $10 that I’ll share with you.

I went to the local craft store and purchased the longest, widest ribbon I could find – I had looked ahead to see what was the largest I could purchase without needing to order online. I found a black ribbon that was 2 ¼” wide, 21’ long (so at least to number 10 each side of center), and didn’t seem that it would stretch too much. I purchased it and a white paint pen for less than $10. First, during a quieter moment of rehearsal, only requiring one of us in the room, I had the assistant stage manager go to another space and mark out a line with the paint pen every two feet. Then, he placed a white piece of gaff at each of those – but with my OCD about spikes, still leaving visible where the EXACT spike was. When I had a moment, I then used a Sharpie to write the numbers, trying to make them as centered as possible to the spike. The numbers aren’t quite as big as I would find helpful on a larger stage, but it worked for our version, especially for this “quick and dirty” version. Our set also only went out about 14’ total, tapered smaller downstage, so the size worked for this show. 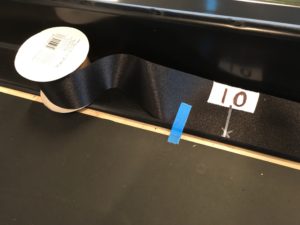 Here’s a closeup of my numberline. Next time I’ll make the numbers bigger, but it worked for our small stage.

For tech on a raised stage, it can also be good to place the same numbers on the audience side of the stage edge, so the choreographer can reference the numbers as well. I’d avoid putting anything higher than the stage (like a table-top tent style), so that the dancers don’t get accustomed to something you’ll remove. Tape the numbers below the stage edge if you can, on that front edge – then remove when you start having an audience.

How about you? If you’ve made a portable number line, what materials did you use?

*Marley is now used as a generic name for the vinyl flooring many companies use for dance. I just found out why it is called marley.

5 thoughts on “Taping the Set for Choreography: Quarter Marks and Dance Numbers”