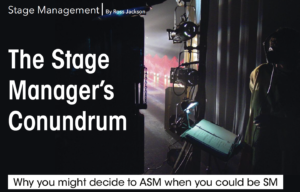 Not too long ago, I was talking to one of my frequent bosses and mentioned that I was applying to be an Assistant Stage Manager for another company when off contract from his theatre. He only knew me as a Production Stage Manager, and said, “Well, you couldn’t do that.” I was rather taken aback. Yeah, I could. In fact, organizing backstage is one of my strengths. When I’m PSM, I try not to interfere – too much – and hopefully I have assistants who CAN take over those responsibilities while I’m out front organizing other things (or side stage, if calling an opera or ballet). Meanwhile, a few months ago, I got to be ASM for the first time in a long time. I enjoyed not being on the receiving end of a thousand emails for the overall production, and somewhat relished one that I received with a “final decision”…knowing I’d been kept OUT of the loop for what couldn’t have been a brief conversation, and likely was heated. Being backstage you do also get to be involved in more of the camraderie of a production than the sometimes lonely location of a booth.

The current (PDF) issue of Stage Directions Magazine has a concise article that helps explain some of the differences, called “The Stage Manager’s Conundrum: Why you might decide to ASM when you could be SM.” Here’s another link directly to the article that may also work, though it says “current issue” so we’ll see how long it lasts. All rights remain with Stage Directions and the original author, Equity Stage Manager Ross Jackson.