This webpage was created as a companion document to Stage Management Paperwork Through the Centuries: A Virtual Exhibition. The presentation was curated by Jennifer Leigh Sears Scheier and Erin Joy Swank first for the United States Institute for Theatre Technology, then updated (including adding this webpage) for the Stage Manager's Association's 2020 National Collaborator's Conference. We thank both the SMA and USITT for the opportunity to share our compilation, and Tina Shackleford and David Grindle for encouraging us.

Please note, all of this is shared for educational purposes. No copyright infringement is intended, and this companion webpage is expressly created to help cite all sources....so that you can go look them up further yourself!

If the images can be found online, we have embedded what is possible, and included a clickable source link, for you to explore in more detail.

If you want to jump around, here are the major sections, with time stamps. Within each section we also list details of each archival item.

0:30 Intros and Earliest Representation of a Stage Manager:

Late 1400s - PAINTING: The Martyrdom of St Apollonia - Jean Fouquet / Public domain
Featured, on the right hand-side of the painting, a monk (prompter) is feeding lines and actions to the "actors" onstage.

6:53 Explanation of the roles of stage manager types Pre-1870

PROMPTER = Person who holds the book.

‣Term dates back to at least the late 1400s, thought to be earlier
‣Stood behind cast and whispered lines and blocking, later in front
‣Eventually wrote out parts, recorded show information in book, called all cues 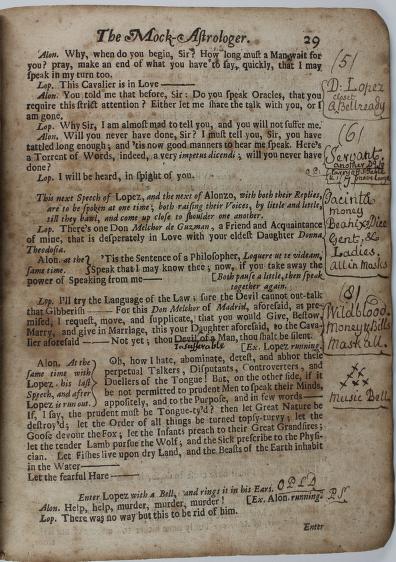 Check out the museum's blog post on this promptbook, another mention of it in one about opera, and a third. 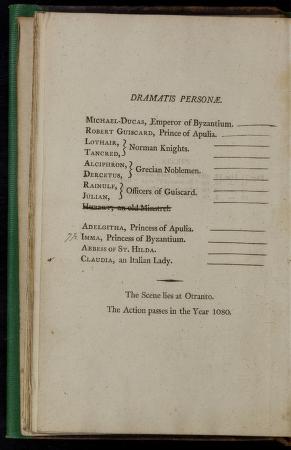 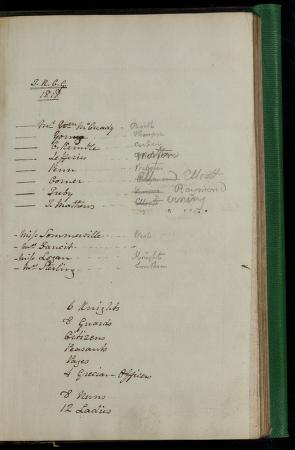 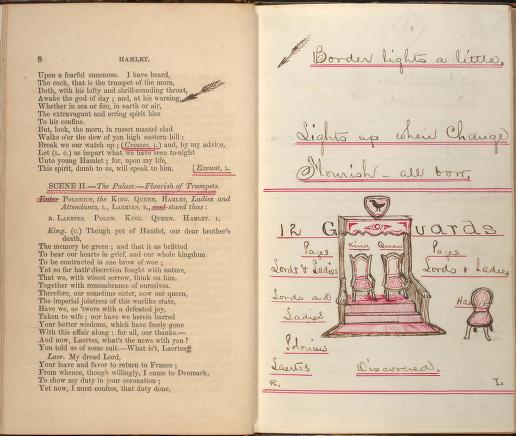 Check out the NYPL blog "The Mystery Shakespeare Plot" on the research to date this archive item.

First pre-printed form we have found

Check out the museum's blog post on the D’Oyly Carte Archive, including this item.

View several pages of the script as well as the museum's blog post on conservation measures for their scripts, and more on the play itself. 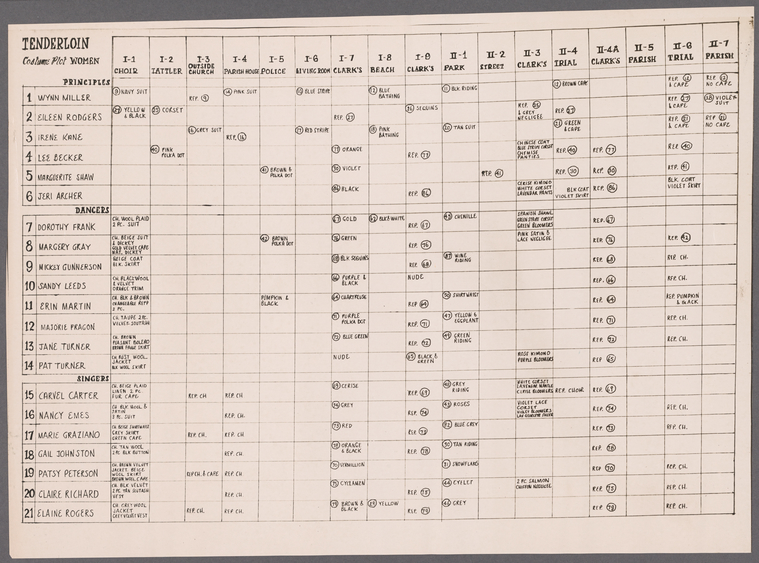 View the blog "Managing the stage: the Phil Friedman papers, 1936-1987" containing this image.

BONUS: Check out the Stage Manager Survey that was discussed in this section and the webinar where we "unpacked" the results.

46:20 PROMPTBOOK - Othello, Circle in the Square
Year Created: 1964 (Yes, we got this one out of order in our presentation!)
Source: NYPL – Billy Rose Theatre Division

Here's a slight primer on a bull switch, also called a company switch.

Photo is included in this RSC page about past productions.

Field templates, those green stencils for theatre lighting and other images, are still available for purchase.

This is possibly Erin's favorite piece of paperwork in the exhibit, especially with the Bird icon for the fly cues. She first learned of it in this comment of the Archiving Technical Theatre Facebook group, and later got Steve's permission to use it in this exhibit. 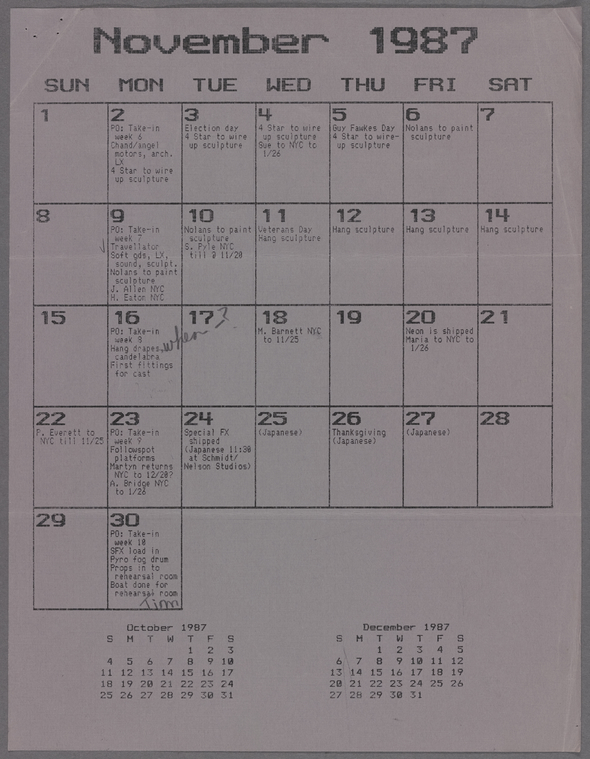 Both weekly and daily reports from this production are available online. 51:53 TEMPLATE REPORTS - The Stage Management Handbook by Daniel A. Ionazzi
Book Copyright: 1992
1996 Use Examples from Rachael Homan Worsley, 1913: The Great Dayton Flood, Wright State University [Submitted to the curators for this exhibit]

Barbara Dilker's Stage Management Forms & Formats: A Collection of Over 100 Forms Ready to Use

52:41 PERFORMANCE REPORT - Death of a Salesman, PCPA Theaterfest
Year Created: 1994
Source: Christopher Sadler [submitted to the curators for this exhibit]

There are many great examples throughout the Lighting Archive website linked above.

53:17 WEEKLY SCHEDULE & FOLLOWSPOT CUESHEET - The Royal Hunt of the Sun, KCRep
Year Created: 1998
Source: Sadie DeSantis and students at University of Missouri – Kansas City [submitted to the curators for this exhibit]

Discussion about the Year of the Stage Manager, the 100 year anniversary of Equity acknowledging stage managers [includes image of AEA Executive Meeting Minutes of February 16, 1920].

Jennifer wrote a brief blog post about this back in January.

If you have anything to contribute (including those who aren't stage managers, especially in different genres), we’d love to see it.

Find either of us on Facebook, via the Year of the Stage Manager 2020 Facebook group – Erin Joy Swank and Jennifer Leigh-Sears Scheier.

BONUS for getting this far: Check out the History of Stage Management Webinar that Jennifer and Erin did in 2019.