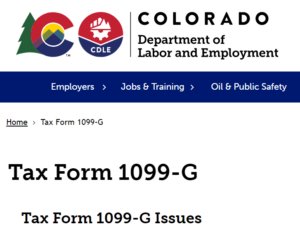 We’re more than halfway through January, so many people are starting to receive 1099-G tax forms for their unemployment. It’s causing a lot of surprises. Here’s what I know, especially for some Colorado specifics.

If you haven’t received it yet, don’t panic. The state has to send them by January 31 (correction, Feb. 1 this year). Also, no tax claims will be processed until February 12.

What Counts as Taxable Income for Unemployment?

First, make sure you have counted all of the following:

For all of the above, you need to add up the gross (pre-tax) amount for each of them to equal what is in Box 1 of your 1099-G. If you elected to have taxes taken out already, that amount taken out adds up to Box 4 for the federal amount (roughly 10% for Colorado) and Box 11 for state (roughly 4%). Note, everyone’s individual tax rate is very different – you may still owe, or may get a refund, but this is a “best guess” amount for the state to take across the board for everyone. Unemployment benefits are not subject to Medicare and Social Security, however.

Note: Residents in six states — Alabama, California, Montana, New Jersey, Pennsylvania and Virginia — will not pay [state] income taxes on jobless benefits even though those states have a state income tax. States that don't have an income tax, such as Florida, aren't taxing jobless benefits at the state level (Source: Herald Review).

For those in the original MYUI system, the “extra” payments were never visible to us as part of our total, but they are on your taxes - AND they are now somewhat visible in MyUI+. At the time of this writing, I can see the $600, but not the $300 or $375. I’m told that those who have been in PUA all along have always had the ability to see all three of these payments in their account. Go to View and Maintain Account Information, then Payment History, then scroll down to the Payment Summary. The $600 is in the “Additions” column. “Deductions” tells you the taxes that were taken out (there may be other reasons for a deduction, but this is the main one). “Payment Amount” is what was deposited into your account after all taxes/deductions. (Remember, you have to add this to the deductions amount in order to find the gross reported for taxes.)

There are two different 1099s you may receive, based on which filing system you were in for 2020.

For the old MyUI system (UI, PEUC and SEB), you will receive a 1099-G with a Payer TIN (Taxpayer Identification Number) of 84-0802678. [UPDATE 2/17 - this is now the correct TIN for BOTH types of 1099Gs.] This is the same number they have used for years. It appears every one of these is being mailed out at this point. They may eventually become available in MyUI+ but either way, they still have until January 31 to send them. If you only receive this one, but did transition to PUA, you need to add up BOTH 1099s.

UPDATED 1/28: For those in the PUA system, first, the state issued 1099s with a different Taxpayer Identification Number, 85-6000577 (or sometimes one less zero - UPDATE: BOTH ARE WRONG, SEE BELOW). Members of my Colorado Unemployment Facebook group were actually the first to spot that when input into a tax prep software it came up as New Mexico instead. I reported it to CDLE officials, and they pulled all incorrect ones from the website to be re-issued. When these were re-issued, they had the same TIN as the other group of people, 84-0802678 (as reported here 1/25). However, it doesn't say corrected* and it doesn't add up to include the other. It also has a Box 10b State Identification number of just "08" whereas the MYUI one has 23-86309. Evidently the 08 is a bit of a place-filler (others have reported that Colorado is the 8th state alphabetically, and often referred there for that), and that while it's not a definitive number, it may not be something the IRS really looks at. I haven't filed my taxes yet this year to see if they even ask for that number. I do know it's NOT reported in the same area as 1099-MISC. I also know that last year I could NOT put two different 1099G in my system, so I've asked her if people are supposed to add the two together in that case, and if they should use the longer number if so. She said she'd try to track down and get the answer. If you ONLY have PUA, I don't think you'll have issues if you put in 08. It's still a little questionable what to do if you have two different 1099s now with the same TIN but different Box 10b numbers. WHEE.

*The CDLE person who called me said that the reason it does NOT say "CORRECTED" is because that first batch hadn't been sent on to the IRS yet. So in Federal terms, there was no incorrect one, and thus no need for a "corrected" one. Confused yet?

What if my amount is still wrong? What if I need another copy?

Again, please check that you have added up the $600, $300 and $375 payments mentioned above, and all weeks of unemployment pre-tax, and have looked for two different 1099s if you were in both online systems. If you still find that your amount is incorrect, visit Colorado UI’s 1099 webpage, where you can report an invalid 1099 or a fraudulent 1099. There are also instructions on changing your address and requesting a duplicate 1099. (Check your own unemployment website if you are in a different state.)

UPDATE 1/31 regarding getting a DUPLICATE/RESENT one - According to the IRS website, "A 2015 law made it a permanent requirement that employers file copies of their Form W-2, Wage and Tax Statements, and Form W-3, Transmittal of Wage and Tax Statements, with the Social Security Administration by January 31. That is also the date the Forms W-2 are due to workers. This upcoming tax season, however, January 31 falls on a Sunday, pushing the due dates to the next business day, which is Monday, February 1." I can confirm that MANY people have received them by mail, including the updated PUA ones. Some people can see them online, some cannot. (CDLE also recommends you review your current mail or email address information, select "View and Maintain Account Information"-> "Contact Information" screen.) If you were sent them in ONE of these ways, that's all they are currently required to do. Frankly, the mail system is incredibly delayed - and since it's my blog, I can be political and blame this on the previous administration. Anyway, that same link above will tell you the way to get a DUPLICATE 1099 is to download one in your account. Hopefully this is updated VERY soon in our accounts.

UPDATE 2/1 - Some people (not me, of COURSE) are seeing a message to contact a 505 phone number to request a duplicate. DO NOT CALL THIS NUMBER. Some poor woman in New Mexico's Workforce area is being flooded with things she can't answer. I have reported this as well.

UPDATE 2/4 - It was asked by our reporter friend to CDLE. Still no ETA on when 1099s will be available for download in MyUI+. Sigh.

UPDATE 2/14 - We have now discovered a form on the website to request a duplicate 1099G. The instructions on this page say to use this form only if you need a duplicate from the old MyUI system (those in UI, PEUC, SEB). Those in PUA should supposedly have access in MyUI+ to download it.

Since we're talking taxes, there is a special circumstance to look for in your taxes, but it may not be automatic in your tax program/make sure your accountant knows/make sure to look for it. “This tax season, tax filers will be able to choose whether they want to use either their 2019 or 2020 earned income to calculate the Earned Income Tax Credit on their 2020 income tax returns, thanks to a one-time look-back provision. The look-back will also help financially challenged people qualify for the refundable portion of the Child Tax Credit, which is allowed even if you do not owe any tax.” "The latest COVID-19 economic relief package, signed by President Donald Trump on Dec. 27, created a special break for obtaining the earned income tax credit after the economic upheaval in 2020."

Also, if you didn't receive one of the federal stimulus payments, or you had a child between your 2019 taxes and receiving them, be sure to account for that in your taxes too.

For an entire article about even more thoughts on unemployment and taxes, including about taking money out of an IRA right now, and more, check out this one from Forbes.

UPDATE 2/7: A new bill has been introduced that would "would remove taxes on up to $10,200 in unemployment aid for the 2020 tax filing year." It would include PUA and PEUC, but has NOT been passed. Nothing is official. The $10,200 exemption amount is intended to cover 17 weeks of the extra $600 federal unemployment benefit that was passed as part of the Cares Act and ran from March to the end of July 2020. Note, it wouldn't cover the $300 Lost Wages Assistance, nor the Colorado-specific $375 stimulus. It remains to be seen whether this will be finalized before the IRS starts processing returns February 12th.