During the pandemic, a lot of us have had to "pivot" from live in person events to some other line of work. (A fellow stage manager friend likes to say "pirouette" instead, which I've been using, too.) While I'm getting pretty knowledgable in how to run the backstage part of a virtual conference or meeting, much of it still just isn't the same as moving an audience or working together on a production, etc., and it can also feel very lonely doing it all from my basement virtual office. 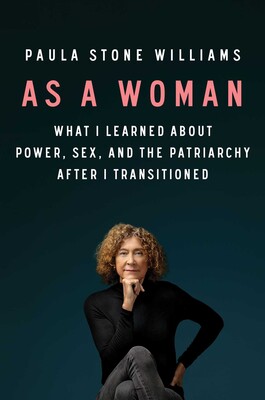 Except for an event I did June 30th.

I am so, so, happy that I was able to work with Colorado Public Radio again on their summer book club chat with the author, a series they call Turn the Page with Colorado Matters. I gave a preview of it in an earlier blog post, a chat with Paula Stone Williams and her book "As a Woman." The way it works is that we have a 90-minute chat with the author online via the Shindig platform. Host Ryan Warner has questions he asks the author, often interspersed with the author reading sections out loud, and then we turn it over to the audience to ask questions. We have some moments of "making the sausage" as Ryan calls it, because this is not the final aired product. If someone should falter over a line, he might back up and take it again. If we have technical issues, there's a chance to edit it out. Think of it as a recorded dress rehearsal for the air in one go. The final product is only audio, but we do it with video as well. We used a snippet of Paula's  Ted Talk, as well as a very personal moment where Ryan had Pedro Lumbrano (the sound guy) play Karen Carpenter's "We've Only Just Begun." This song had featured in the book. I can't even begin to explain how touching that moment was, for everyone involved. Just go listen for yourself. (The song is about 39 minutes in, but really, listen to the whole episode, including more "feels" several minutes later. The whole thing is 49 minutes long, from our 90 minute event.)

During the evening, we got the inside scoop that it's confirmed: a limited tv series is in development based on Paula's life. I can't wait to see it. I also can't wait to finish reading the rest of her book - life got in the way, and I'm only a quarter of the way through it. Now that I've finished my fourth virtual conference, and an epic road trip, I can get back to that!

I wasn't the only one who found the evening incredibly moving. Liam Adams tweeted, "As a regular listener of @ColoradoMatters, I was struck by the uniquely personal conversation between the host, @cprwarner, and the guest, @paulaswilliams2, on Wed. So, @CarinaJulig and I wrote about it in this week’s edition of “Have Faith, Colorado.”

Here's a link to his article mentioned above.

The author herself tweeted, "If I had to use one word to describe it, the word would be 'healing.' Thank you Ryan."

If you haven't yet listed to it, Ryan invites you to "Laugh, sing, and cry with us..."

I really want to get back into a theatre, but I have to say, this was about as close to satisfying that itch that I've had during this pandemic - at least, certainly since recording A Merry Little Christmas Carol back in November/December 2020 (show credits). More please.

Additional info on "how it happens" behind the scenes, for those wondering:

For the real "sausage-making" rundown, let's start with the photo I tweeted the evening of the event.

My laptop, shown in the bottom left, contains my webcam. It is perched in the air so when I'm teching things behind the scenes, my co-workers aren't looking up my nose. (Shindig has private video chatting, so the audience doesn't see me.) Just out of camera shot is an additional keyboard that isn't up in the air and thus easier to type. That laptop screen is showing the admin page of the Shindig virtual platform. Here I can chat with the other admins/producers, view which audience members have raised their hands or typed a question, publish those questions or push them "onstage," and other cueing ability. As explained in a previous blog post, I have my Amazon Fire mounted above it as a second monitor. That's where I have one copy of our joint Google script, and is also where producer Carla Jimenez informs Ryan via the Google chat what the next question will be. (We've usually had some admin chat back and forth about the questions prior to her posting them in Ryan's chat, including which one of us - including third admin Clara Shelton mainly operating as a backup/cover - will check in on a hand-raise person, to see if they have a good connection and an appropriate question, or which submitted questions we may skip over.) Shindig has a great feature where if you are looking at an audience question and click "Copy" it formats to your clipboard automatically "Text question from [Name of person]..." and the question itself. We simply add in a second line of where the person is located, per an extra field we asked when they logged in. This way, Ryan can announce "Jane Doe from Superior, Colorado, asks...", etc. As he does that, I push the "Publish" button and it displays on screen for all of us to see; I usually change the default from 10 seconds to 30 seconds. The far right monitor has another copy of the script going (easier to read this big - but the other one is good to be able to copy/paste from Shindig), as well as then the audience view of Shindig, which renders things slightly differently - usually better looking than the admin view itself. Meanwhile, for true technical information: Pedro was in the studio running OBS with two cameras so that Ryan and Paula could share a window in Shindig. I have emphasized that window/pod so that it is larger on the right. On the left in Shindig is a PDF slide of the name of the event and the book cover image. I had a different slide that gave instructions of how to ask questions (raising hand or typing it in), and for our one brave guest who joined on screen, we chose the option to emphasize their video feed while talking, and Ryan/Paula went to a second slide below the title card. While I have the ability to play pre-recorded videos in Shindig, this particular time Pedro ran the TedTalk clip through OBS. Somehow in the routing of all the radio/studio equipment, Ryan and Paula would not have been able to hear it if I had pushed it. This is normally not an issue when running simple computer webcams. Meanwhile, when questions are published, they show up across the bottom of the video pods. That's a lot to try to explain quickly. I've given quite a few stage managers mini tours of how the platform works. Contact me if you are interested. I think hybrid events are going to continue, even after we hopefully get to return to being in person.